Get Your Sabres Swag – Join the SABRENATION!

Through a partnership with League Lineup and Prep Sportswear, members of the SABRENATION can now order and customize apparel from the Pittsburgh Sabres Online Store. More than 1,000 different products are available and nearly all of them can be customized with any name and any number you wish. Additionally, we’ve made sure that there are items for every member of the family – men, women and children. Available items range from the basic “Property of…” t-shirt to the performance apparel worn on the field by the players.

Here’s a sample of the what you’ll find…

The Pittsburgh Sabres came as close to handing the undefeated Western PA Wildcatz their first loss as any team since the first week of the season. The Sabres dominated both sides of the ball for 46 minutes on Saturday night. The problem is, the WPIFL games are 48 minutes long.

Behind a debut performance by newly activated QB Camdin Crouse (3) that earned him the WPIFL Offensive Player of the Week honors, the Sabres came out firing and looked nearly unstoppable. Trailing the Sabres by as many as 18 points in the first half, the Wildcatz outlasted the Sabres just long enough to pull off the comeback in the final 17 seconds to remain undefeated and in control of their own destiny at 6-0 while dropping the Sabres to 3-2 on the season.

Crouse, Thornton (12) and newly acquired Chris Clark (1) carried the Sabres and accounted for all 5 TD scored. Crouse finished 13-21, 160yds and 5TD (4 pass, 1 rush). Thornton, who was not expected to play (back) turned in another all-star worthy performance with 3TD catches in the first half. Thorton and Crouse came up less than a yard short of a miraculous finale as Thorton hauled in a bomb at the 1-yard line as time expired.

Clark, acquired from the Hurricanes in a 4-player deal, made his presence as a Sabre known with 2TD and more than a handful of stellar catches. The Sabres coaching staff expects many more big plays from the combination of Crouse and his three prime targets – Thorton, Clark and Reiter (9).

The Sabres take on the Mahoning Valley Tigers this Saturday at 9:30pm. The Sabres are focused on a rematch with the Catz on St. Patrick’s Day to decide who represents the NAIFL USA NORTH in the post-season. The Wildcatz can wrap up an undefeated season and the WPIFL title this Saturday with a win but must still defeat the Sabres one last time to move on to battle for the NAIFL title and get a second chance at the NAIFL CANADA winner. The Catz lost to Canada (Hammer) in a pre-season charity game to benefit the family of fallen officer Derek Kotecki in mid-December.

As the February 18th deadline for roster changes approached, the Pittsburgh Sabres were active in adding key positions to the team as the battle for the WPIFL regular season title is heating up. The Sabres are one game behind the undefeated Western PA Wildcatz and will see them twice in the final three games – controlling their own destiny. If the Sabres can defeat the Wildcatz this Saturday, the championship may very well come down to the final game of the season versus the Catz.

The Sabres have signed/activated the following players to the final 2012 active roster. Several players were released or placed on inactive status.

Also, Camdin Crouse (QB) has been activated for the final 3 games of the season and the duration of the playoffs. Crouse plans to lead the Sabres in their summer GDFL season (outdoor) as well.

The Sabers prepared for their showdown with the Wildcatz in the evening’s nightcap, holding off the PA Raiders 28-20.

The Sabers needed just 3 plays to travel 30 yards to open the scoring. Dave Brickner connected for 10 yards apiece to newly acquired Bob Reiter, and Terral Whittington, then Jared Thompson ran for the final 10 yards to give the Sabers the early edge.

The Black and Gold defense added 2 points on the first play after the kickoff, as Josh Meyers sacked Raiders QB Tommy Reed in the end zone for a safety. Then, the Sabers scored a second TD on the initial play following the free kick, as Brickner hit his favorite target, Bruce Thornton, on the run to complete a 45-yard scoring play. The Raiders finally broke their scoring droughton the final play of the opening 15 minutes, as Reed scrambled for a 38 yard TD.

Alan Howard’s 2-point run cut the Sabers’ lead in half, at 16-8 as the quarter turned. Nelson Gee picked off a Brickner pass around the midway point of the 2nd quarter, and that led to the Raiders’ second TD, a 15-yard run by Reed for his second score of the game. Each team scored again before halftime, Brickner hitting Reiter for 15 yards, and Reed connecting with Howard for a 2-yard toss, making the score 22-20 Sabers at the break.

A great defensive effort by the Sabers’ Adam Henderson thwarted the Raiders opening second half drive, Henderson stripping Reed of the pigskin, and falling on the loose ball at midfield. The Sabers went 25 yards in 9 plays to score on a 2-yard Thompson run for his second six-pointer of the night, increasing the lead to 28-20.

The Sabers’ defense tightened up over the final quarter plus, getting a big 4th down stop by King Dean, then Gemere Bey went to work, picking off a Reed aerial, then, on the game’s final play, recovering a Reed fumble caused by Troy Newman.

Brickner had a rough night, statistically, hitting just 6 of 21 passes for 100 yards, while Reed went 6-for-14 for 46 yards, and was sacked 3 times. However, Reed carried 10 teams for a WPIFL season high 92 yards.

Wasting a chance at securing a share of the lead, the Sabres fall in that effort 42-20 to the defending champ A-K Valley Hurricanes. The Pittsburgh Sabres continue their chase of the Western Pennsylvania Indoor Football (WPIFL) Championship on Saturday, February 25 at 9:30pm against the PA Raidesr, whom the Sabres beat 52-6 before a 3-week layoff to accommodate the Pittsburgh Power (AFL) and their tryouts.

Defensive Leaders: LB Roy Clanagan led the Sabres with 4 tackles and 1 sack. Injured LB Adam Henderson (23) will take the field on the 25th and has been cleared to play after undergoing wrist surgery shortly after the week 3 defeat of the Raiders. Henderson was relinquished to kicking duties for this loss (1 attempt, 45 yards). 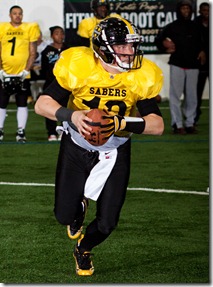 Through two games, Brickner has passed for 298 yards, 4 TD and a healthy 50% completion percentage.

In 52 attempts, Brickner has only been intercepted twice. Brickner is on pace to throw for more than 1,500 yards this season.

Bruce Thornton Jr. (10) is on fire through the first two games. In Saturday’s game, Thornton added another 73 yards to his 100 yard performance in week one to put him at the top of the league‘s receiving leaders with nearly 13 catches for 173 yards and a touchdown).

In recognition of this performance, Thornton was named Offensive Player of the Week by the WPIFL. Congratulations on another sound performance.

Jared Thompson (40) scored his first touchdown of the season in the first half by de-cleating the only defensive back who was in his way.

Thompson (40) added another TD in the second half on a run of 8 yards. Thompson has the primary responsibility of protecting the QB from blitzing and #40 has done that well – not allowing a sack through the first two games.

Thompson also caught one pass out of the backfield for 11 yards.

Adam Henderson (23) racked up the Sabres first interception of the season mid-way through the first quarter. Henderson, a team captain and co-owner, returned the ball 10 yards before being hit out of bounds.

Henderson fractured his wrist on that play and, after surgery Tuesday, will more than likely miss this Saturday’s game. He is scheduled to return the 25th to take on the Wildcatz who are tied with the Sabres for first place.

The Sabres take on the defending champion A-K Valley Hurricanes this Saturday at 10:30 at the Southpointe Fieldhouse (http://www.southpointefieldhouse.com). The Hurricanes lost a heartbreaker to the Western PA Wildcatz by 4 points in week one. The Hurricanes were on a bye week for week 2.

The Sabres, behind a stellar and stingy defense, outgained the Raiders 180 to 17. 134 of those yards were through the air. The offense invoked the “mercy rule” with a lead of 35 points halfway through the third quarter.

The Sabres improve to 2-0 following after suffocating the Raider’s offense, holding them to just 17 yards for the game. The Sabres outscored the Raiders 52-6.
January 20, 2012